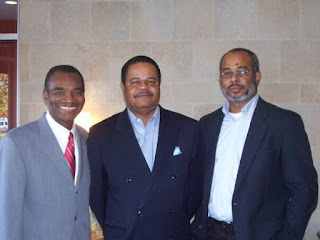 Q. Tell us a little about yourself. Where are you from and how did you end up at the Top Flight Foundation?

A. I was born, raised, and educated in the city of Duquesne which is about 20 miles south of Pittsburgh, Pennsylvania. I am one of nine children, the son of sharecroppers. My parents were from North Carolina. My father moved to Pittsburgh where he found work as a steelworker. They provided a lovely, loving environment that fostered a belief in us that we could accomplish our goals and dreams in life.

My parents are the most successful people that I've ever met in life and they accomplish all of their goals and dreams despite the harsh economic environment that prevented them are creating wealth for their families. In this hostile environment that maintained a constant assault upon their dignity as human beings, they carried themselves in a dignified manner that elevated their existence and set an example for their children. Be the best in anything that you choose to do. Always expect excellence from yourself. Never accept anything less than excellence from yourself. They taught us how to succeed despite the obstacles.

I worked for 23 years for other people, in industries like automotive, steel, construction, printing manufacturing, telecommunications and material handling. In 1990 I purchase controlling interest in a small typewriter repair business name Debriants Office Services Inc. and built it into an award winning organization.

We covered eight states providing Tier One service to some of our nation's largest banks such as Wells Fargo, Bank of America and a number of regional banks such as BB&T, First Citizens, in addition to city, county and other government agencies, plus hospitals, colleges, universities. Additionally, we served our clients for over 25 years.

In 1992, I join the Carolinas Minority Supplier Development Council and became a regional Minority Business Enterprise Input Committee (MBEIC) chairperson, then rose to national chairman. I met Lionel Spearman in 1995. He would become my vice chair on the Carolinas MBEIC, and then Rules Committee chair while I was national chair. While attending the Tuck School of Business minority executive program, I met Steve Bailey. He would become my first vice chair on the national MBEIC.

It was through our shared experiences on these committees that we observe the blind spots in the diversity industry. This gave birth to the Top Flight Foundation, where we felt we could provide a holistic approach to connecting the silos of good work being done and through a collaboration of effort provide the overall needs to multicultural communities that were not being addressed.

Q. Explain what the Top Flight Foundation is and if the current economic situation helps or hurts your organization.

A. Top Flight Foundation develops, educates, empowers, nurtures and vets business who in turn empower other businesses and their communities facilitating excellence and community prosperity.

Top Flight Foundation will be regarded as the preeminent authority and resource for the development of world class socially-responsible and culturally-relevant communities.

The current economic situation helps our business as the diverse community has not been able to speak to the return on investment to the corporate world. We validate established multicultural businesses that are able to define their value proposition, then execute the plan to increase productivity, reduce costs and improve efficiencies for their corporate clients.

Reaching the $2 million milestone provides the foundation for which we can build companies to tens, hundreds of millions of dollars, if not beyond. This juggernaut in turn provides a sustainable pipeline of vendors that the corporations can rely on. It also provides jobs that stabilize communities, creating wealth for the owners of the business which will create more jobs, which in turn provides more customers for the corporations, who provide shareholder dividends, while everyone pays taxes, which provides the services for healthy communities. Everybody wins!

Q. Let’s talk about the idea of building a community. Where do we start and how do we utilize and grow our resources to improve our current situations?

A. Once again we take a page from history. There have been successful self-contained black communities in the past. For instance, Central Park was once a thriving black community made up of doctors, lawyers, hospital, libraries, and schools. This was an oasis in the middle of an economic desert for black people.

Having tier one multicultural suppliers look to the suppliers from their communities first. Sourcing goods services and supplies from tier two , tier three, tier four.  Tier dollars would stay in the multicultural communities. This would build a pipeline of jobs which create (home ownership) wealth which create sustainable communities, creating a middle-class, which is the future of America. By 2040s, according to the census bureau the multicultural population will be the majority. We can't afford to have a broke middle-class, this is a national imperative.

A. It's been estimated that $1.2 trillion passes through the hands of the black community alone. If we redirected just $1 billion we could create 50,000, 2 million dollar a year businesses. Each would have an average of 10 employees per business thereby creating 500,000 jobs in the community. When you include the Hispanic community, Asian community, white women community, Native American communities, and all other multicultural communities, our goals are really quite modest.

I say five years because most of the sand is out of my hourglass :-) Our objective is to build something, a legacy if you will, that lives beyond us. Our foundation will continue to give to the communities from which we come from. The Top Flight Foundation founding partners have create partnerships with people younger than us, smarter than us, with more energy than us, that will ensure sustainability of this foundation and that we will meet its mission long after we're gone.

Q. One of your key goals is to grow 50,000 minority owned small businesses to million dollar corporations with little to no debt. How is this possible?

A. We can do this by taking a page from history. There has always been a black middle class in this country. There were even millionaires in the deep South at the height of slavery. They were entrepreneurs. They self-financed; they did business with each other; they passed along knowledge to each other; they shared successes with the each other. They mentored the next generation beginning with their family and then others of like mind to ensure they had a pipeline of talent to carry on the family business. They created wealth, generational wealth, which gave them freedom. They taught their children the rules of capitalism so that they got to the point that money worked for them instead of them working for the money. Economic power made them truly independent as they were shut out of the mainstream. In A capitalistic system you must have capital in order to have a seat at the table. Those who sit at the table make the rules that the rest of us have to live by.

Q. Top Flight’s upcoming Cradle to Wealth Solutions Summit is set to begin later this month in San Diego, CA. What is your overall goal with the summit?

A. The San Diego Summit, which is being done in cooperation with the Council for Supplier Diversity, is the foundation cornerstone on which we erect our national foundation. These events are not one and done, they are annual events. We are establishing business development roundtables, which are composed of key local stakeholders. Leaders from the community will be our boots on the ground. We will implement our program in each community as we connect the silos that are doing good work there.

Q. After San Diego, your summit is set to expand to other areas in the country. What are the key states and demographics you’re hoping to positively influence along the way.

Q. Where do you see the status of minority owned businesses in 5 to 10 years with the help of organizations like the Top Flight Foundation?

A. We can keep 10% of the 1.2 Trillion dollars in our communities for six days instead of the current six hours. Having supplier base participation equal the incoming retail dollars derived from our communities.

Learn more about the Top Flight Foundation and the Cradle to Wealth Solutions Summits at www.topflightllc.org.
Posted by Estro Communications at 1:41 PM