There’s nothing new about #OscarsSoWhite. Once upon a time, Hollywood’s diversity battle stretched as far as The White House.

For the second year in a row, there are no people of color nominated for Oscars in any acting category. In protest, a social-media storm erupted, as did a black-celebrity-endorsed boycott. 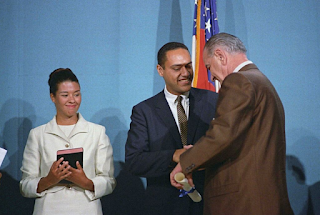 The Academy of Motion Picture Arts and Sciences — led by Cheryl Boone Isaacs, its first African-American president — responded with plans to diversify the Oscar-bestowing organization’s membership by 2020.

Back then, Sidney Poitier was a rare bright spot. With the 1963 film Lilies of the Field, he became the first black performer to win the Best Actor Oscar. And, in 1967, he starred in three major films: To Sir, with Love and multiple-Oscar nominees In the Heat of the Night and the interracial love story, Guess Who’s Coming to Dinner.

TV anomalies at the time included Nichelle Nichols as Lt. Uhura on Star Trek (1966–1969) and Diahann Carroll starring as a widowed nurse raising her son in Julia (1968-1971).

Behind the scenes, people of color were scarce and the film industry, Alexander recalls, barely noticed.

“People who testified on behalf of the industry really didn’t quite seem to get the point that it was important in the production of a product or in the depiction of people that it be reflective of some sense of what the real world was like” he says.

“The kinds of artificial and direct barriers that they put up were extraordinary,” says Alexander, who later became the first black Secretary of the Army. “At least, I think, what our hearings did was to point those out. We didn’t have any enforcement power, but we recommended that the Justice Department bring ‘pattern and practice of employment discrimination’ suits against the industry.
“Unfortunately, at that point, you had Richard Nixon coming in as president and he did nothing about it. But our hearings did cause the embarrassment, which is a good factor sometimes, of the industry and therefore many of the positions were at least opened up for the first time.”

Under a federal mandate, studios like Disney, Paramount and Universal — and the International Alliance of Theatrical Stage Employees union — established job-training programs that were advertised through minority-oriented newspapers and radio stations between 1970 and 1977. However, these programs evaporated after Alexander’s departure.

Pioneering film publicist Rosalind “Roz” Stevenson, whose career spanned from 1982 to 2008, didn’t benefit directly from the EEOC’s actions, but recalls their positive impact.

“The Writers Guild had a program called The Open Door. There was a program for accountants,” Stevenson says, plus training for make-up artists, camera operators, costumers, assistant directors and more.

Those possibilities encouraged the Compton, California, native who began as an actress. “Once I landed in the publicity department, I felt that was something I could do well and be really happy doing,” says Stevenson, “I learned that the studio had a program that would support me in becoming a publicist.”

As a senior publicist at Universal, Stevenson, one of Hollywood’s few high-ranking publicists of color, led national and local TV, radio publicity and African-American campaigns, including Jurassic Park, The Best Man, Erin Brockovich and The Hurricane, for which Denzel Washington received a Best Actor Oscar nomination.

Through RSPR — her own PR firm targeting black audiences — Stevenson boosted Ray (which scored Jamie Foxx his Best Actor Oscar), American Gangster and The Pursuit of Happyness. In all, she publicized nearly 800 films, including the Rocky and James Bond franchises at MGM.

Despite these successes, critics warn there is no happy ending yet.

“Hollywood is still run by white men,” says Dr. Darnell Hunt, director of UCLA’s Ralph J. Bunche Center for African American Studies, home of industry scorecard The Hollywood Diversity Report. “So, basically, you have white men making decisions about what’s viable, what’s bankable, what we should spend our money on, and they surround themselves with other white men. So, you get this echo chamber and very little consideration of different perspectives when decisions are made.”

Until this reality changes, critics insist Hollywood will remain #OscarsSoWhite.